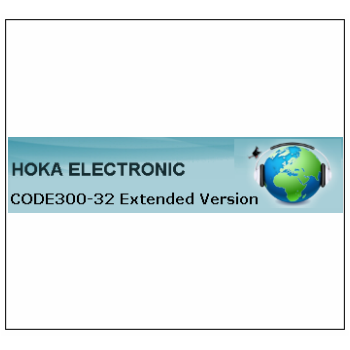 The Extended version offers the same modes and tools as the standard version, plus some important additional features:

In this way your PC becomes a super decoder analyzer with up 20 decoding modes running at the same time! Production work is made easy and cheaper as never before! Automatic Audio recording with graphical squelch, automatic text search facilities, whatever a professional user is looking for, it is included here. Audio input by LAN for two channels, with a completely free choice of the sampling frequency allows full integration of this version into larger systems and direct connection to digital wideband receivers without the need of re-sampling. All functions and tools are remote controllable by TCP/IP.

A brief description with the most important technical details.

Code300-32 Extended allows the running of two sessions of the program at the same time. This means that with two audio cards the system can handle up to 4 audio channels simultaneously: One could have two receivers, one into the Right (R) channel and the other into the Left (L) channel of the LINE IN input socket of the first audio card and the same configuration for the second audio card.

Two receivers are connected to the first audio card (left and right channels of the LINE IN). Two receivers are connected to the second audio card with the same configuration. Running the decoder, the input channel can be selected from both the control panel and from any of the analysis/decoding tools. All the operations can be performed simultaneously even when using many tools at the same time. A few examples :

In this way we can follow the entire traffic of two different networks.

** these modes are optional available only