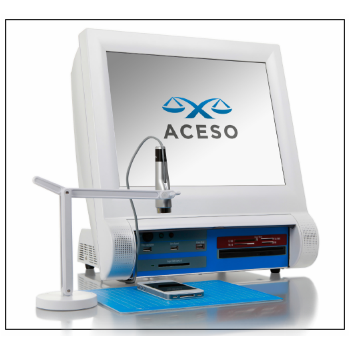 flexibility within the software to capture filter and annotate exhibit photographs

Radio Tactics ‘integrated’ camera capability on the ACESO kiosk platform allows users to quickly and seamlessly add exhibit photographs into a mobile device evidence report. The solution has been developed to facilitate the addition of these photographs in a manner that remains fully compliant with Best Practice guidelines for digital evidence collection.

An ACESO camera enables the operator to take high resolution photographs of devices and components, for example, the front and back of mobile devices (including IMEI numbers), memory cards and SIM cards. In addition the operator may also choose to take pictures of device screenshots, where this is permitted by the policy and procedures of the organisation.

The camera has been carefully selected based on exacting performance and end-user operational requirements to ensure that it works seamlessly with the ACESO unit.

Mechanical versatility is provided by a multi-jointed stand providing three points of articulation so that the camera can be easily adjusted to the optimum height and angle.

The camera features an excellent macro mode to capture tiny details and the smallest text from distances as close as 5cm. With the camera capability enabled, the function is made available at both the pre and post-acquisition stages. Pre-acquisition single or multiple photographs can be taken with the images displayed on the ACESO terminal. Notes can be entered for each photograph. Previewing of the photographs facilitates taking multiple pictures and retaking pictures as required.

Photographs, any associated file metadata and operator notes are included in a separate section of the report titled ‘Photographic Artefacts’.

The camera can be simply connected via the USB port on the ACESO unit. The stand and camera should be positioned as shown below for optimum ease of use. The package includes a textured photographic background to dimension the object and minimise reflected light to preserve the sharpness of the images.

With the camera capability enabled, the ACESO process flow ensures that any exhibit photographs are captured and stored as an integral part of the device acquisition and the associated evidential report. By embedding the photographs all of the case data is preserved as a single entity which automatically ensures the evidential integrity.